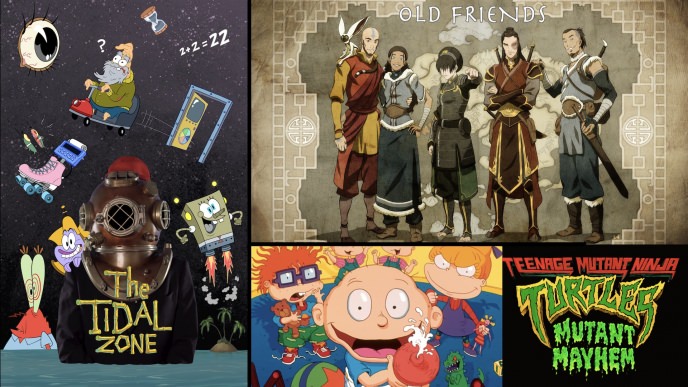 Bleeding Orange: The Life and Times of Nickelodeon Animation

At Nickelodeon, Naito oversees animation content across all formats and platforms--spanning linear, digital, TV movies, theatrical motion pictures and SVOD. Since joining the network in 2018, Naito has since overseen a renaissance at the studio of animation content and production in scale and creativity.

She has been a driving force at Nickelodeon bringing new projects, top talent and key partnerships to Nickelodeon Animation, to further bolster its content pipeline across preschool, kids, theatrical and its studio business. Notable projects include: Star Trek: Prodigy from Nickelodeon and CBS Studios’ Eye on Animation; best-selling book adaptations Real Pigeons Fight Crime, produced by James Corden and Ben Winston, and the critically acclaimed Big Nate; Tiny Chef in partnership with Imagine Kids+Family; the first-ever SpongeBob SquarePants spinoff Kamp Koral: SpongeBob’s Under Years; the animated series based on Monster High, the iconic franchise in partnership with Mattel and the new animated series Transformers: EarthSpark, in partnership with Hasbro; Teenage Mutant Ninja Turtles: The Next Chapter (August 4, 2023), produced in partnership with award-winning Point Grey Pictures’ Seth Rogen, Evan Goldberg and James Weaver and directed by Jeff Rowe, PAW Patrol: The Movie and the sequel PAW Patrol: The Mighty Movie (October 13, 2023), in partnership with Spin Master Entertainment and directed by Cal Brunker; and The Tiger’s Apprentice (February 10, 2023), starring Henry Golding and directed by Raman Hui and co-directed by Paul Watling & YongDuk Jhun.

To continue growing Nickelodeon’s animation business beyond linear, in 2019, Naito oversaw the network’s multi-year output deal with Netflix to produce original animated feature films and television series, based both on the Nickelodeon library of characters as well as all-new IP for kids and families globally. This deal marked an expansion of the existing relationship between the companies, which has already brought several popular titles to Netflix, including animated specials Rocko's Modern Life: Static Cling and Invader Zim: Enter the Florpus, and movies based on The Loud House and Rise of the Teenage Mutant Ninja Turtles.

Building an inclusive and diverse culture at the animation studio and developing emerging and homegrown talent has been a strong point in Naito’s mission throughout her time at Nickelodeon. Naito has brought in more than 1400 new employees across dozens of animation productions, and since employees began working remotely in March in 2020, over 200 new positions have been filled with studio productions operating virtually at 100%. Nickelodeon currently has over 50 animated shows in production across series, its studio business and movies, and doubled its production slate by end of 2020. Under Naito’s leadership, Nickelodeon also held its first-ever virtual job fair this year, garnering nearly 6000 attendees globally, exemplifying a commitment to hire inclusively and to reflect authenticity and diversity in storytelling.

Naito produced DreamWorks Animation’s Oscar®-nominated feature, The Boss Baby, while also earning her a PGA nomination for Outstanding Producer of Animated Theatrical Motion Pictures. Prior to DreamWorks Animation, Ramsey worked as a producer for Blue Sky Studios, at Cartoon Network as Head of Movies and at Nickelodeon Movies as Vice President of Development & Production. Her executive and producer credits include: Scooby-Doo! The Mystery Begins (2009), Barnyard (2006), The SpongeBob SquarePants Movie (2004), The Wild Thornberrys Movie (2002), Hey Arnold! The Movie (2002), the Oscar®-nominated Jimmy Neutron: Boy Genius (2001), Rugrats in Paris: The Movie (2000), and South Park: Bigger, Longer & Uncut (1999).

Naito is a member of Women in Animation, the Producers Guild of America and the Academy of Motion Picture Arts and Sciences. She has been named to CableFax’s 2021 Most Powerful Women List, CableFax’s 2021 D&I Mentor of the Year, The Hollywood Reporter’s 2021 Women In Entertainment Power 100 List, and as an Asian-American champion of representative storytelling, Gold House’s 2021 Most Influential Asians List. She received her Bachelor of Fine Arts from Maryland Institute College of Art and her Master of Fine Arts from the California Institute of the Arts. Naito is based in Nickelodeon’s Burbank, Calif. studio.